Showing posts from January, 2019
Show All

A Creative Christmas at Kingston Lacy 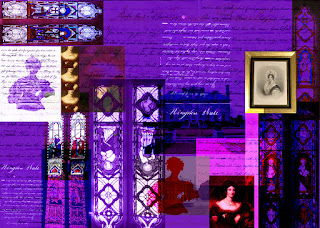 Towards the end of last year I was working with the National Trust's Kingston Lacy  on their 'Creative Christmas' project for December 2018. Myself and two other artists selected female members of the Bankes Family  to represent via handmade decorations, which were then placed around the house as part of the Christmas festivities. This was the second project I've done based on the Bankes Family (the first being  Threads of Narrative ), so I feel fairly well acquainted with the family now. This time I based my pieces on Anne Bankes , who was the sister of William John Bankes , a stained glass artist in her own right and after William John's exile she took on much of the work overseeing the refurbishment of Kingston Lacy. Not a lot of detail about her life is known, however I was able to take a few of her personal letters, portraits and some photos to design a print in homage to her: I had this digitally printed onto velvet and cotton in two colourways, the cott
Post a Comment
Read more
More posts
Visit profile